Before I start I have spotted something - I skipped a number and have only just noticed there was no painting 39 - so the target is now 101 paintings.  (sulk) 7 more paintings to go.

We have another artistic one who jumps straight onto the easel, and I get the feeling, like Red and Ricky, Rudy is going to be camped out there!!

Lovely boys - now can you teach Red how to paint those two pictures!!

While I was watching the boys painting - Red surprised me by creating a new masterpiece down in the basement.

Rudy has the savvy sculptor trait - so I brought him a sculpting station to see if it draws him away from the easel - it worked straight away.

I spot a strange girl sitting in one of the bedrooms watching TV.  When I checked out everyones friends lists - I was shocked to find that she is Fennels romantic interest !!!  Bless he has got himself a girlfriend.

I spot a moodlet which makes me laugh - tastes like frog!!
He has only been kissing a frog!!  I did not even realise they did that on free will!!  I'm hacked off that I missed seeing him doing it!!

Basil - "So you are telling me, you kissed a frog and it turned into the girl sitting next to you on the couch?!"
Fennel - "Yep!"
Basil - "Not that I can believe what you are saying, but whatever possessed you to kiss a frog?"
Fennel - "The wishing well fairy told me too."
Basil - "Frogs! Fairies! I'm taking you to see a doctor - you are off your head!!!"
Fennel -  "Says you who has an imaginary friend called Cuddles!!"

I now know why Rick is painting these stained glass pictures (thanks to Jenn sending me to a wiki page that explains the painting skill)  It is his genius trait.

They give the time machine a rest and test out the igloo tonight - making a seed.  Not that they can create any more time travel children - Marlene has taken up the last free place in the house (he he)

We are now getting another portrait of Harry

While Red is painting he takes himself off for a nap.  Scaring Rudy half to death.

Rudy runs out of the house and stands out in the garden. 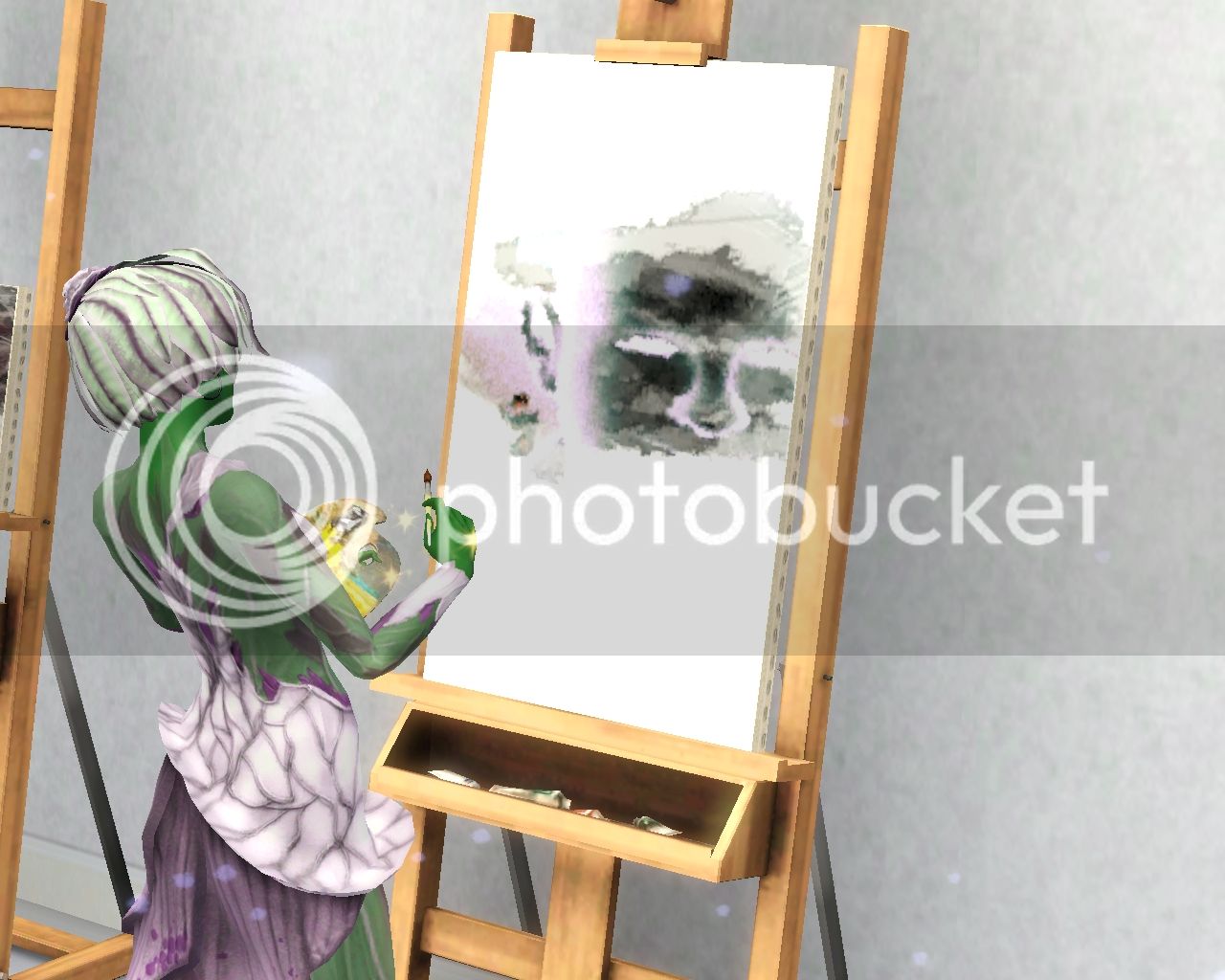 The snowmen outside is starting to melt

I spot we now have a fifth gnome - a winter one.

Fennel and Marlene are back from school and do their homework together.

It looks like we have the makings of another clingy couple.

Marlene becomes a young adult - she receives the excitable trait

and they are not wasting any time - celebrating their birthday in style!!

Wow!!  Calm down ...that igloo is flying!!
Even though Marlene is human - they still can not make babies normally - she gets a forbidden fruit seed in her inventory.

Red is also having her birthday

Being elderly seems to have done her good - she goes off and starts to paint a new painting.

Rick is out - I worry about him still not having a love life - but he will be hard pressed to find one in this town unless he is gay, which I don't want him to be.  This town seems to be full of only men!!

Saying that, there is Lavender - but there are no heart farts going on between these two.

(Just out of interest while he was on the community lot I clicked on the spar with him to see if he went in for a discrete rendevouz what sex it through up - his list were all females - so I guess that is a good sign, he should go straight.)

Fennel and Marlene and in and out of the time machine like yo - yo's.  If they are trying to make a child, its not happening because the house is full.

Harry is out - but shockingly all they do is watch tv together and chat all night.

I have never seen the painting on the right that Rick painted before.

Joline has her birthday and is the last one to become a young adult.

She received the insane trait

It is also Drews birthday

He becomes a mature adult

Confession time - Rick kept flirting with the male pap outside so I deleted him - me bad - I'm trying to prevent him being gay, but also the pap was driving me totally cuckoo anyway - constantly singing the cheer leader chant over and over!!
But I wasted my time deleting that guy, we now have a new pap outside - and another bloke Rick thinks is hot and has heart farts for.

He goes inside and starts thinking about love with a grin on his face.  Seriously Rick ... he is an old man!!

The snow has now gone and I noticed the spring gnomes have mulitplied - there are now four of them.

Suddenly Rudy seems to become irresistible to both Drew and Marlene GGGGRRRRR.  They both start to constantly flirt with him and Marlene tries to get him into the time machine for woohoo.  Now everyone is getting upset with each other.  Drew is having a midlife crisis but I don't know what Marlenes excuse is!!

I decide to remove the temptation and move Rudy and Joline out into their own place before we have a relationship disaster ... but first they all go to graduation.

Fennel - Marlene and Joline are graduating.

It is also Rosemary's graduation day too

Joline and Rudy are now living in the house next door.
Which means we have 2 spaces free in the house again - I wander who is going to be first to fill them?!

The best footie team on the planet.

You might recognise Marty Keaton, who I have lifted from Sunset Valley, being my favourite ever premade sim - you will be seeing a lot of him on this blog - so if you don't like it - walk away now!!!!! You have been warned ->> I am obsessed--!!!